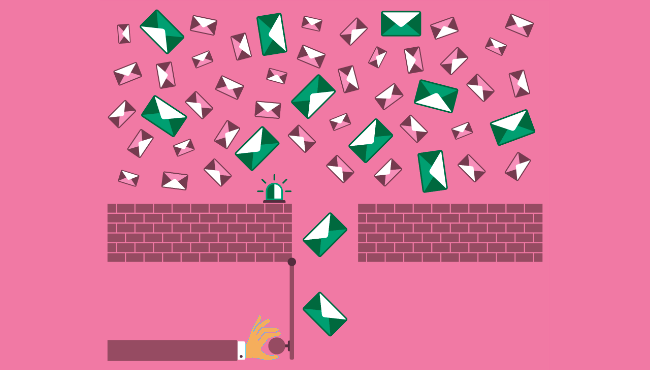 Candidates running for political office today, especially those running for president, have to get their message out. And more and more that means sending out emails. Lots of emails. Emails that can easily be misinterpreted as spam.

You may think political candidates sending you unsolicited messages about their campaign is spam, but it’s not. The reason? According to an article on the Internet Patrol, “politicians are exempt from the anti-spamming laws and rules set forth in the U.S.’s Federal anti-spamming law, CAN-SPAM. The reason they are exempt is that by definition email from a politician or political candidate is political speech, and so any law that one passes regulating speech is trumped by the 1st Amendment, which prohibits the government from impinging on political speech.”

So, whether you like it or not, candidates have the right to send you their political message via email. That’s the good news for the candidates. The bad news? A lot of those email are ending up in your spam folder. Now, maybe you like that idea, or maybe you’re missing out on messages from the candidate you endorse, but it doesn’t change the fact that you may not be getting the emails at all.

From Internet Patrol, “Now here’s an interesting question: do spam filters impact the presidential candidates’ messaging and thus, if you extend the question far enough, maybe even the election?” And the answer is, maybe.

According to the article, The Markup conducted a less than scientific study around Gmail for the US Presidential campaign and what they found was interesting. “Only one candidate, Pete Buttigieg, had a majority of the email that his campaign sent land in the inbox. By contrast, five candidates (Yang, Weld, Harris, Walsh, and O’Rourke) had their email go directly to the spam folder, and nine candidates (Bloomberg, Castro, Sanders, Booker, Klobuchar, Biden, Warren, Steyer, and Gabbard) had their email go to the promotions tab.”

Receiving presidential candidate emails is just one example of why it’s so important to be able to control what does and doesn’t make it into your spam folder. And that’s where cloud-based spam filtering from DuoCircle comes in.

Whether you host your own email servers on premises or you use one of the big service providers like Office 365 or G Suite, cloud-based spam filtering from DuoCircle gives you the control you need to get the emails you want.

The service includes commercial anti-spam and multi-tiered anti-virus filtering with customizable rules updated hourly. It includes whitelisting, blacklisting and customizable filtering rules. It comes with real-time access to the mail queue and logs to verify that mail is being forwarded to the destination server. It comes with Smart Quarantine which cuts down on junk mail even further. And it integrates seamlessly with whatever email solutions you’ve deployed.

Try cloud-based spam filtering from DuoCircle risk free for 30 days. You’ll be glad you did and so will the presidential candidates.