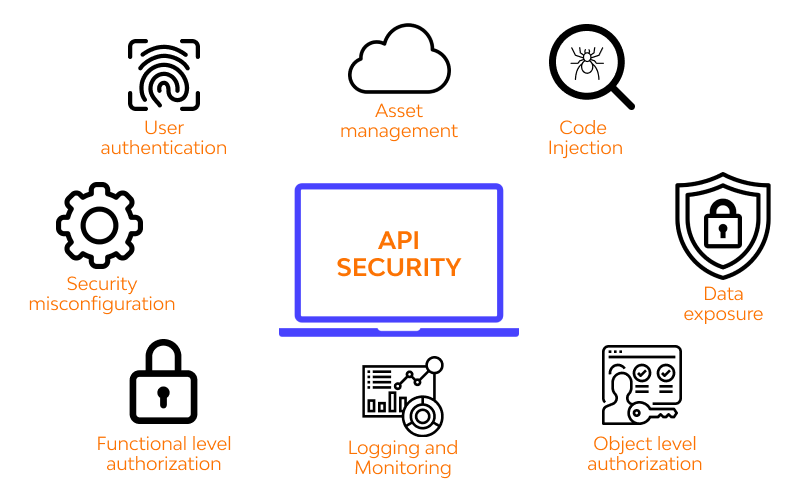 With API security, you’re not just securing your data but the strength of the infrastructure as well. When hackers exploit the vulnerabilities in the API and gain access to the entire network, they engage in privilege escalation and employ different kinds of attacks and compromise the most sensitive data. This could lead to huge revenue losses and long-term damage to the firm’s reputation, all of which has a better probability of being avoided with due efforts made in API security.

The most popular companies in the world including Facebook (Meta), Verizon, Uber, and Instagram have all suffered significant data breaches due to API-based attacks. Therefore, an API security strategy combined with optimal everyday practices is key to ensuring maximum protection.

APIs face some of the same threats faced by networks and other applications but they’re still worthy of a mention since they’ll make sure that the right security strategy is designed for the firm.

This kind of attack involves sending a large number of requests with the goal of overloading the server and making it crash. The end purpose is to ensure that the network, web applications, or systems are unavailable for the authorized users. Typically, API endpoints are the main target of this attack since they contain a lot of sensitive information and other exploitable vulnerabilities.

Hackers are able to discover vulnerabilities or backdoors which allow them to place malicious code or commands in the user input such as user credentials. SQL injection is the most common example and involves the vulnerabilities in SQL queries that enables the hacker to gain access to the SQL database and leak sensitive information.

In this scenario, hackers step into the traffic between the two interacting systems (such as the client’s browser and the server), impersonating one’s role to the other and becoming a dangerous proxy. For APIs, MITM attacks usually happen between the API and its endpoints or between the client and the API.

This is also a type of injection attack that targets vulnerabilities which provides the hacker the opportunity to insert malicious script (JavaScript) into the website’s code.

This attack method uses stolen credentials on the API endpoints for authentication purposes to gain unauthorized access to gain a hold of the system or initiate data leaks.

After gaining an idea of the frequent threats that must be dealt with under API security, let’s look into some daily measures that can be taken from the firm’s side for ensuring maximum security.

Lack of proper user authentication and authorization measures affect a lot of public APIs. A part of the OWASP API Security Top 10 list, broken authentication addresses the flaws in proper authentication of users by the API or when the existing verification method breaks apart easily.

APIs are often the guards of the entire organization’s databases which means that the hacker stands to gain a lot by attempting to access the sensitive information. To tackle this situation, one must use solutions devised using proper authentication and authorization measures including OpenID Connect and OAuth 2.0.

If the firm has many APIs under its hood, it should maintain a list of all of them in order to manage them properly. You can always use perimeter scans to organize the current APIs into an inventory and then work with the team of developers for their management.

All the subjects exposed to the system, be it users, networks, processes, systems or devices, should be given access privileges depending on their roles and the required data. The APIs should be designed with the same principle.

Encryption of the API payload data is especially important for those organizations that use APIs to frequently transfer sensitive data including personally identifiable information, financial details, health information, etc. For this purpose, TLS encryption is the best available option.

Unsecured APIs should be dealt with more caution and urgency than is seen now. A lot of businesses refuse to see this as their problem which leads to the frequent exploitation of these vulnerabilities. Build the element of security into the APIs during the development process as much as possible.

6. Monitor the amount of data being shared

APIs are more a developer’s tool than the client’s which means it can expose a lot of sensitive data such as keys, passwords, business information, etc. Therefore, place security scanning tools into the DevSecOps to control the amount of sensitive information being exposed. Place the responsibility of filtering data on the endpoint rather than the user interface to avoid sharing more information than necessary.

These are a few of the tips that can be followed to ensure your firm remains on the top of API security. Always make sure that you consult with an expert in the field before engaging in API security testing procedures for best results.